The superheroes of the Jewish Academy of Orlando

Jewish Academy of Orlando originally planned to present Disney's "Alice in Wonderland" in May, however to ensure the safety of JAO's students and community, the full-scale musical production, starring the children of the Jewish Academy of Orlando, will be presented one night only on Thursday, Oct. 15, at 7 p.m. at the Wayne Densch Performing Arts Center.

Jewish Academy of Orlando will offer daily activities during Passover/spring amidst the COVID-19 stay-at-home order. Head of School Alan Rusonik said, "All of us, students, teachers and parents alike, need a break! In just a matter of a few short weeks, our world was turned upside down."

Jewish Academy of Orlando continues to make improvements on remote learning based on parent survey results. The school began remote learning only a day after schools across the state nation were closed for weeks or more.

Jewish Academy of Orlando held is first-ever remote model Passover seder with a 1960s-theme for its students, parents and guests using Google Meet. The students told the story of Passover in a traditional way with the four questions, traditional meal (at home), and songs. The 1960s-themed costumes, and songs added to the excitement...

JAO was on WESH 2 News

We have exciting news to share! We have been working with WESH 2 News and our remote Seder was included in a piece about making the holidays meaningful, given our current situation. Here is a link to the story that aired last night.

Jewish Academy of Orlando has made private education more accessible by initiating the Tuition Assistance Program. The TAP program adjusts tuition based on a family’s income for new students in grades TK-5th. TAP is designed to boost enrollment of new students by specifically targeting middle-income families. 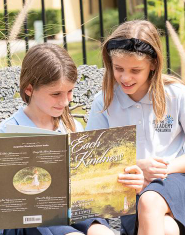 The value of character education

Jewish Academy of Orlando launched Positive Education, a character education program across all grades. This program is introducing students, teachers and the JAO community to the language of character strengths from the field of positive psychology, integrated with Jewish values.